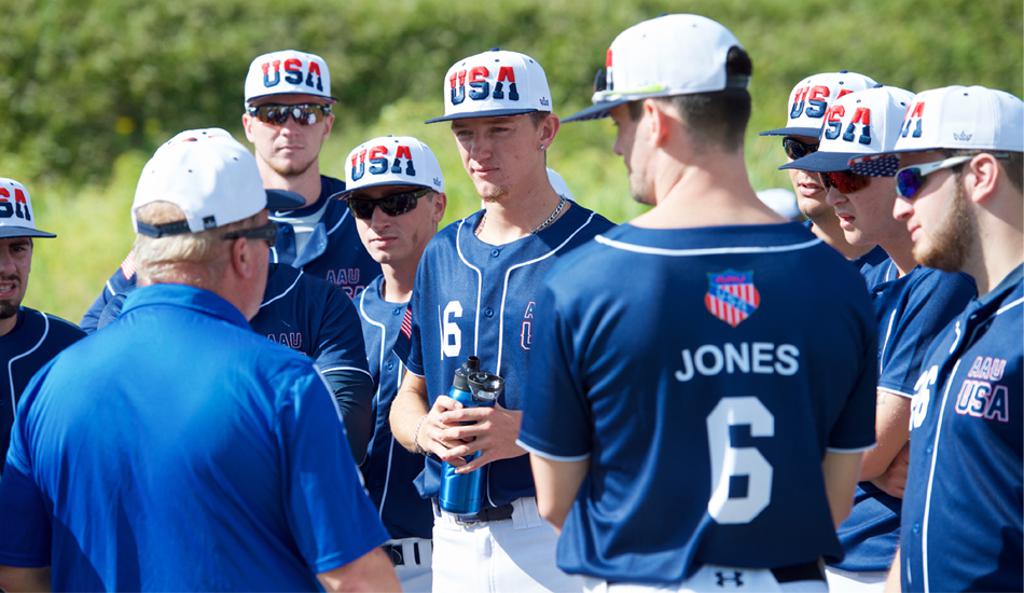 Entering its third year, the past two playing as the Sant Boi Barcelona Falcons representing Spain in the Collegiate Baseball League Europe, the AAU USA International Collegiate team embraces expectations ahead of an intriguing 2018 summer in Scotland and Ireland competing vs those countries’ national teams and clubs.

“We are OK with expectation and accustomed to it,” manager Mike Graham said. “For one thing, it means we’ve got things going on. This is our third year and the past couple were highly successful, and now we’re representing all AAU Baseball around the world, so we welcome the attention that our operation is earning for the brand.”

If any team is equipped to spark conversation, it’s v3.0 of the AAU USA International Collegiate team. 2018 has the program’s most experienced and accomplished roster, a fully loaded pitching staff, and promising newcomers that opponents must account for.
Potential and talent only go so far though. Look back to the 2016 season, when the team was 11-3-1 and top-seeded before losing in the championship game. And last year, when injury and illness struck, causing two straight losses to end the season 10-4-1 one game short of the league title game.

But if AAU USA International Collegiate can navigate a blitz schedule that includes opening in Scotland at Edinburgh, a doubleheader in Glasgow, back to Edinburgh for a doubleheader, then to Dublin for an international tournament in Ireland starting two days later, the team’s third season could be memorable.

“The expectations to win are nothing new,” Graham said. “We were the CBLE’s winningest two-year program of all time, so our recruits and coaches and fans expect us to be the hunter not the hunted.

“Another thing is, if you look back three years ago, going into the international collegiate summer league play, we had some young talent but didn’t know what to expect and were not sure we were ready to compete at that level.

“As it worked out, we won two pennants and were right in the thick of the playoff races both years and just lost a couple games late and weren’t able to win the tournaments.

“This year appears the best team talent we’ve had, and the energy and enthusiasm of the guys coming in is off the hook. That indicates they understand the expectations and what it takes to once again position us to potentially win a championship.”

“That kind of production and experience returning is very unusual in collegiate summer baseball,” manager Graham said. “They’ve been groomed to play international baseball and have played a lot of it.

“And after a few years of combined experience doing this now in the UK, France, Spain, Belgium, the Netherlands, Czech Republic, and Germany, they’re mature guys who have seen it all and understand how to respond to all types of situations.

“The entire roster is made up of motivated young men ready to go out there playing the game they love, navigate the world, and do it representing the 850,000 athletes, coaches and volunteers of AAU sports.”

This year’s roster already has been cast having high potential, and while no one has predicted anything, Graham doesn't mind calling this the program’s best roster ever going into a season.
“We’ve had a lot of good teams that have performed at a very high level, and I see that type of team now. And that type of player in all these guys. There are no weak spots on offense, and we’re going to be able to do a lot more things and flex in ways that we weren’t always able to do last year in the field.”

“Depth is better, recruiting is better, and overall we’re better."
After a league-leading 2.7 runs allowed per game in 2016, last year’s defensive play took a step back (4.2 allowed). Offense though increased from 5.6 runs scored per game to 7.0 per game, enabling margin of victory to remain constant (2.8).
Graham anticipates this year’s defense will be better. “We’ve got older guys that are experienced and who are already established veterans in international baseball,” he said, “and who are going to be physically ahead of where we were in prior years.”

He said the program is embracing the challenge of playing the national teams and clubs of one of European baseball’s rising countries in Scotland and Top 50 power Ireland, currently #47 in the world baseball rankings.